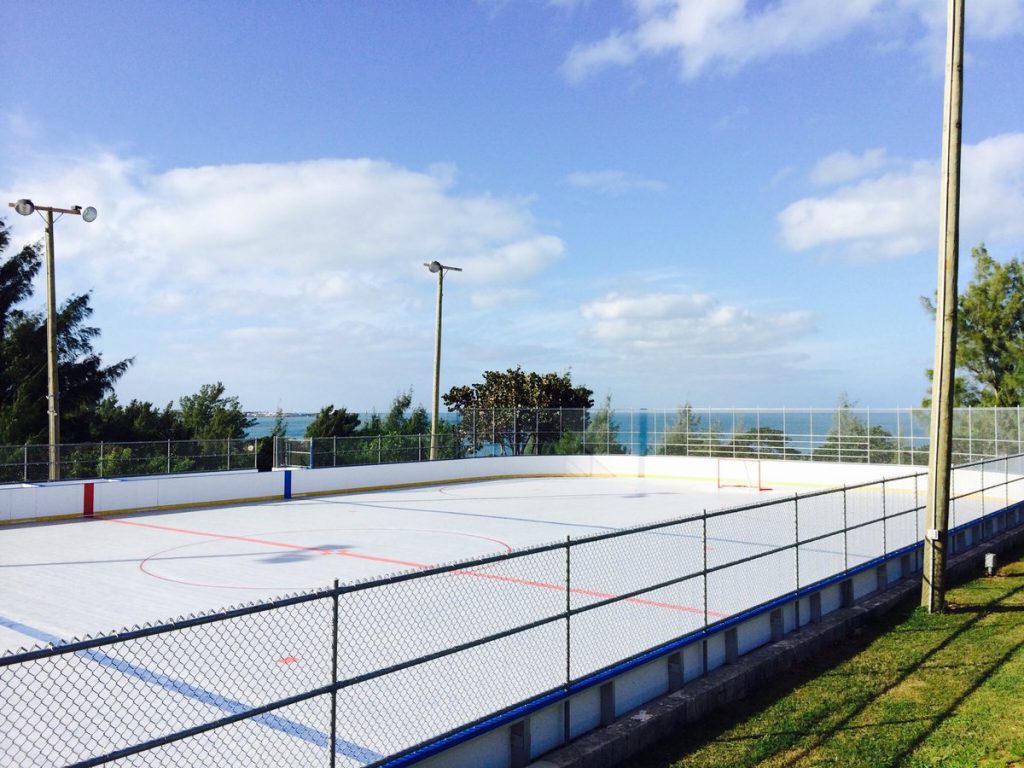 When the ISBHF Board of Directors decided to approve Bermuda’s bid for the 2018 Masters, bringing ball hockey to a beautiful island rather renowned for its pristine beaches and sailing than ball hockey, a feeling of excitement could immediately be sensed – well, is there a more beautiful rink in the world than the one in Pembroke?

The beautiful Pembroke rink was the main rink, but the amazing Bermuda Ball Hockey Association Organizing Committee managed to set up a temporary rink in the Bermuda Dockyards, where some round robin games were staged in the 4-on-4 format.

In the Men’s category, 12 teams competed in two groups for 8 spots in play-offs. And if we were to look for the best game of the tournament, it would have to be the last round robin game in Group B – when hosts Bermuda played Slovakia in a winner-takes-it-all affair. Slovakia took the lead in the 8th, and then again in the 29th minute, but a late goal from Chris Merritt sent the game into a shoot-out. But it was the ISBHF Hall of Fame member Peter Figura of Slovakia who sent his team through, leaving the hosts empty-handed. And yes, this was the size of the crowd cheering on the hosts!

In thrilling semi-finals, Canada defeated Italy 5-1 and Canada Halton Leafs, having the Tournament’s Best Goalkeeper Aaron Campisano in net, advanced past USA. The final was therefore set to be an all-Canadian affair. And it was the Canadian National Team who, with the help of their deadly offensive trio Peter Cabral, Jeremy Bishop and Tournament Most Valuable Player Terry Ryan, took the 4-0 win, clinching the title in Bermuda.

All results and stats of the Men’s event are available here: https://stats.isbhf.com/tournament/18

Five teams competed in the Women’s category – two from Canada, two from the USA and one from Slovakia. Despite their undeniable effort and desire to fight, it was Ladies Slovakia who fell short in the round robin, missing out on the play-off spots.

In the semi-finals, Canada showed dominance and beat Canadian New Tecumseh Xtreme 8-1, as Team USA Red gave their all against their USA Blue rivals, holding them to a two-goal deficit for the majority of the game, eventually losing 0-3.

On the final day, it was USA Red who won bronze after a 4-0 win, and Canada took home the gold medals from the hands of His Excellency John Rankin, Governor of Bermuda, after defeating USA Blue 2-1. Cherie Stewart of USA Blue was the standout player of the event, claiming both the Top Scorer and Top Forward awards.

All results and stats of the Women’s event are available here: https://stats.isbhf.com/tournament/19

Overall, the first ISBHF event staged outdoors was an enormous success. The Bermuda Ball Hockey Association prepared a world-class event in all aspects, from the outstanding two rinks to the closing ceremony. We at the ISBHF hope that we will soon be able to have another great Masters event, to make great memories again, like we did in Bermuda!