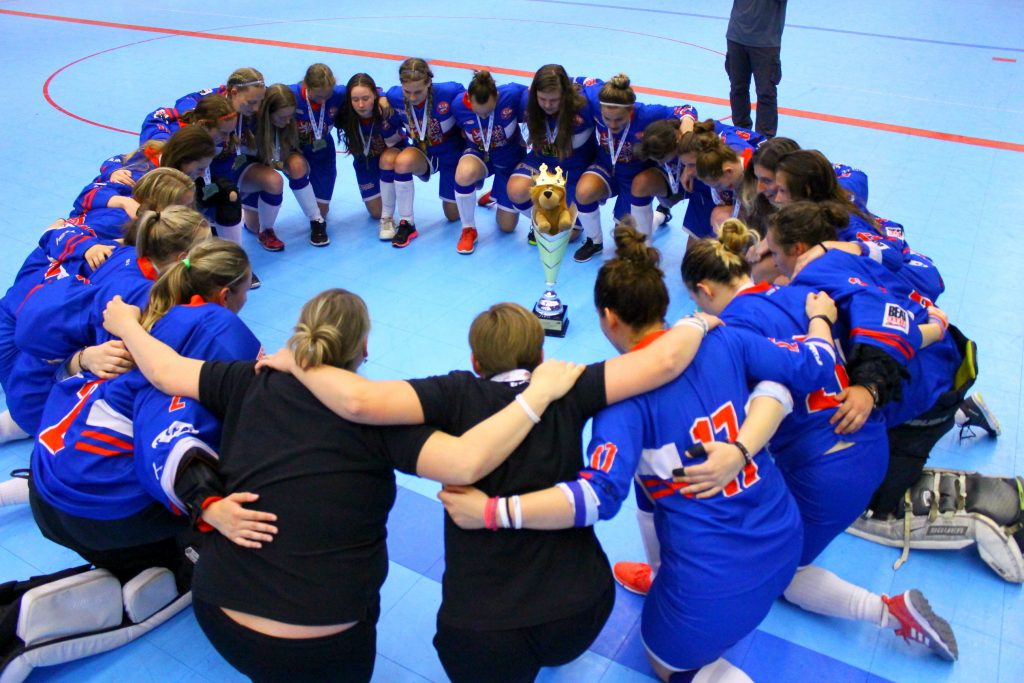 With the 2021 ISBHF events scheduled (still!, with updates coming soon), here’s the last part of the recap of 2018 ISBHF events series – the last time the contested categories were on display. What were the highlights, the best games, and which players proved to be most influential on their team’s success in 2018? Today, we are looking at the 2018 ISBHF U16 Boys & U20 Girls World Cup.

The Junior World Cup was a brand new format introduced in 2018, and it was the first time a Women’s junior category was contested in the ISBHF. The Czech Ball Hockey Federation selected two hockey cities in the Eastern part of the country – Přerov and Zlín, as host venues.

As the ISBHF allowed up to two teams to compete from each nation, a strong line-up of 10 teams, divided into two groups of 5, arrived in one host city each. Přerov hosted favourites Slovakia, USA Red, Canada East, Great Britain, and the Czech Republic U15 team – hoping to prepare for the next year’s U16 World Cup. Zlín hosted the Canadian West team, USA Blue, Switzerland, Poland, and the Czech Republic U16 selection.

As final standings in the respective groups determined the seedings for placement games (no play-offs in place), every game and every point gained or lost was extremely important. And as one could expect, many memorable games were on display for the many fans watching in the rinks and on the webcasts from home. To name a few – USA Red vs Canada East (2-0), Switzerland vs USA Blue (1-2), or an unbelievable upset as the Czech U15 youngsters beat Canada East 7-6 in overtime. But the game of the tournament title, without hesitation, goes to the Canada West vs Czech Republic game, effectively being a semifinal, as the until then unbeaten teams clashed in a battle from which the winner would advance to the final, and the loser only to the bronze medal game.

In the 41st minute, the Czechs held a comfortable 6-4 lead, and nobody knew what was coming. Austin Ungurean cut the deficit in half, and Kaidan Johnson sent the game to overtime! The craziness didn’t stop then – the Canadians missed a penalty shot in overtime, before Kaidan Johnson proved to be the man of the moment again, sending Canada West to the final after a 7-6 overtime win. ISBHF President George Gortsos, present in Zlín, recognised the game as one of the best in ISBHF history. You can watch the full game here: https://www.youtube.com/watch?v=o8lPjVGoB2A

The gold medal then went to Canada West, as they beat Slovakia 3-1, and the hosts took bronze as they defeated USA Red 4-3. All results and stats of the U16 Boys event are available here: https://stats.isbhf.com/tournament/11

The first event in the U20 Women’s format welcomed 5 teams – hosts Czech Republic, Canada, Great Britain, Slovakia and USA. The system was similar to the U16 Boys event. Again, no play-offs, with the group stage deciding the Gold Medal and Bronze Medal matchups. As games went on, two favourites separated themselves from the rest – Canada and Czech Republic, marching onto the final. After their group stage meeting, a tactical battle, ending in a tight 1-0 win by the hosts, it was clear that the best was yet to come. Slovakia and USA then finished 3rd and 4th respectively, setting up the encounter for bronze. And some great ball hockey was also on show by the GB team, who scored their goal of the tourmament against Slovakia.

Strong individualities then proved crucial in the medal games. For Slovakia, Tabačková shone in goal, with Randová and Dobošová leading the team forward. They proved clutch for Slovakia in the bronze medal game, as they soon built a 2-0 lead, eventually winning 2-1. In the gold medal game, the offensive power of Kubínová, Škorpíková, Patočková and tournament top goalscorer Kaltounková secured the gold for the host nation, defeating Canada 4-1. You can watch the full game here: https://www.youtube.com/watch?v=YK84zEZMdF4

All results and stats of the U20 Girls event are available here: https://stats.isbhf.com/tournament/10

And to top it all off – a fantastic highlights video available to watch by clicking on the image below: