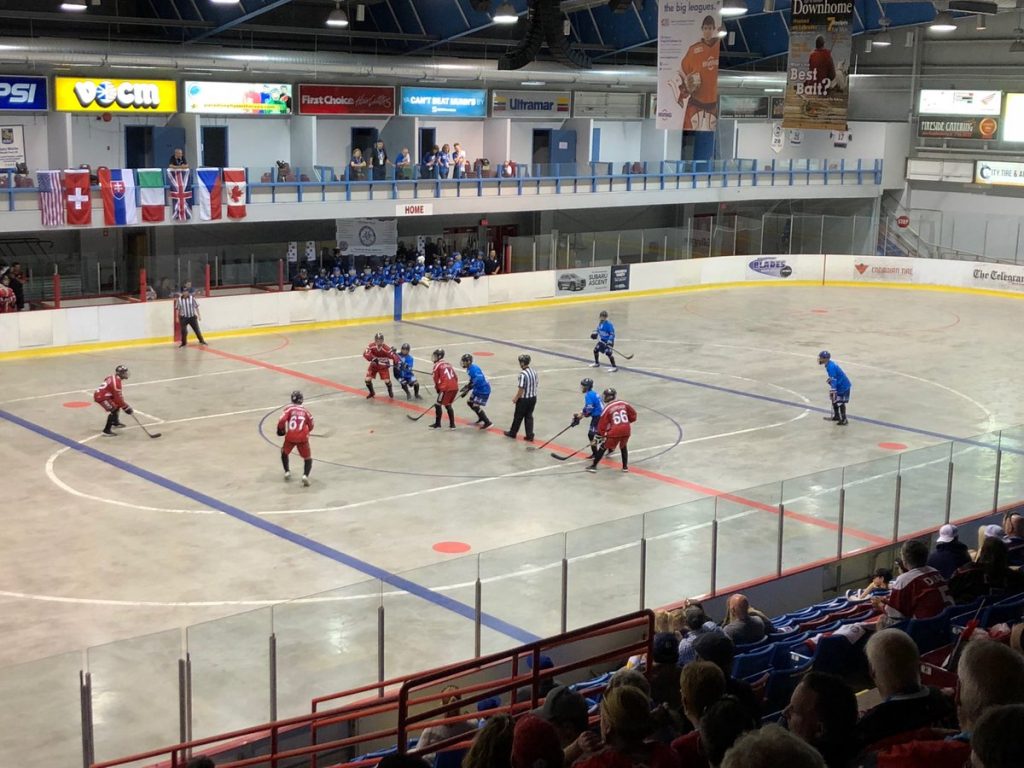 With the 2021 ISBHF events scheduled (still!), here’s another part of the recap of 2018 ISBHF events series – the last time the contested categories were on display. What were the highlights, the best games, and which players proved to be most influential on their team’s success in 2018? Today, we are looking at the 2018 ISBHF U20 & U18 World Championships.

The ISBHF Juniors returned to Canada, and precisely St. John’s, NL, after exactly 10 years. This time, the selected host venue was the Mount Pearl Glacier complex, offering two rinks and sufficient spectator capacity for enthusiastic fans both from home and abroad. And that complex offered an ideal platform for the best young ball hockey players to showcase their skills and fight for their nation!

In the U20 category, 5 teams – hosts Canada, Czech Republic, Great Britain, Slovakia and USA played a round robin for 4 spots in the semi-finals. Two of the most interesting games in the round robin were the Canada vs Czech Republic showdown, in which Canada was close to losing a 3-0 lead in the last three minutes, and the deciding match for 4th place between USA and Great Britain, in which the GB underdogs took the lead early. However, the US prevailed, scoring important goals on their powerplays, denying the British of a historic play-off appearance.

In the semis, Canada defeated Slovakia 9-2, while the Czechs beat the USA also convincingly, 8-1. In the battle for bronze, Slovakia showed no mercy, beating the Americans with a high deficit, 11-2. But the game of the tournament surely has to go to the final. The Czechs took the lead against Canada three times, but the hosts always managed to find an answer, with Noah Perlic’s goal from the 38th minute sending the game into overtime. In a nail-biter ending, Czech Republic’s Matěj Štefka converted a power play advantage into the game winning goal – the Czechs won 4-3 after OT.

All results and stats of the U20 event are available here: https://stats.isbhf.com/tournament/14

Seven teams competed in the U18 category – hosts Canada, Czech Republic, Great Britain, Italy, Slovakia, Switzerland and USA, meaning 6 games for each team in the round robin, deciding their ranking for placement games – for gold, bronze and 5th place. That tournament system made every game incredibly important, reflected in high-quality ball hockey shown on the rinks of Mount Pearl Glacier. While it is difficult to pick just one game, the battle of North America – Canada vs USA – had it all. Final score of 6-5, 4 goals scored by tournament’s top scorer Brent Broaders – that was quite something for an early morning game!

In the placement games, Italy defeated Switzerland 3-2 to claim 5th, and Tomáš Nauš was the only goalscorer in the Bronze medal game – winning it for Slovakia against the US, 1-0. And so it was the undefeated Canadians, against their Czech rivals, battling it out for gold. In yet another exciting match, the hosts controlled the game, winning 3-1. Of many great players, two stood out – Jordan Albright of the USA won best forward, confirming his form a year later at the 2019 ISBHF Men’s Championship, at which he scored 10 goals (!), and Dawson Mercer, tournament’s best defenseman, who later won gold and silver at the IIHF World Junior Championship and got drafted by NHL’s New Jersey Devils in first round.

All results and stats of the U18 event are available here: https://stats.isbhf.com/tournament/15

A great tournament in the Newfoundland picturesque scenery, fantastic level of ball hockey and passionate fans – trademarks of the 2018 ISBHF Juniors – and we can’t wait to have more events like this!