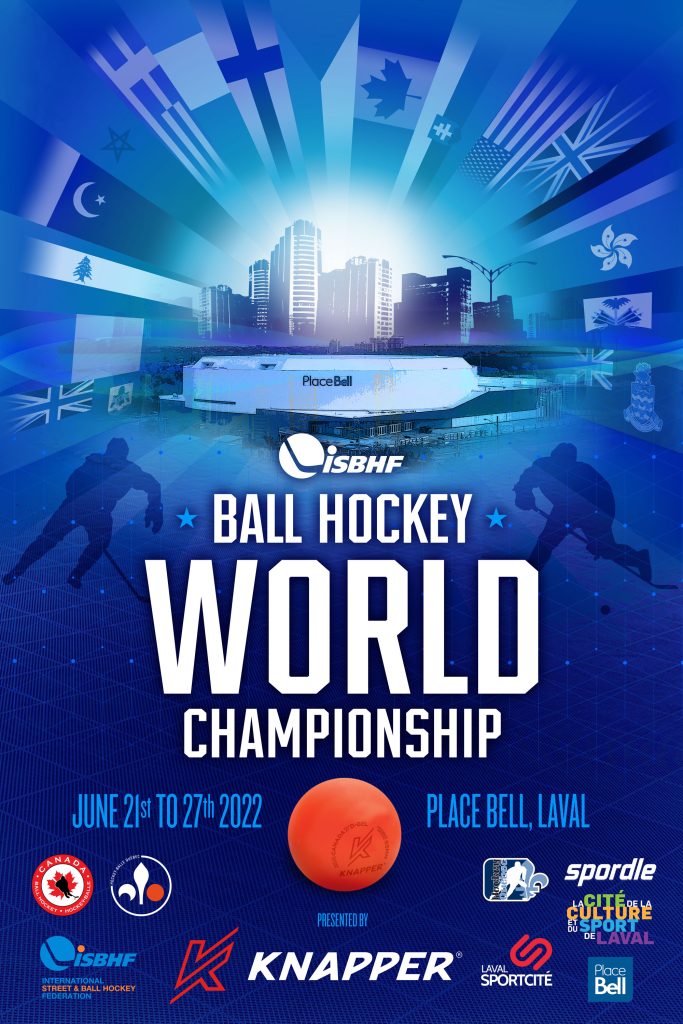 Hockey-Balle Quebec, in collaboration with Knapper, is pleased to announce the confirmation of Place Bell as the official venue for the ISBHF 2022 World Ball Hockey Championships.

We are committed to honouring the legacy of this great event, and in so doing, HBQ in collaboration with Knapper, have secured the most suitable venue for this illustrious competition. This modern preeminent facility will be the perfect venue for players and fans alike.

We welcome you all for the official opening ceremonies taking place on June 21st at 19:00 pm. The first games of the tournament will be taking place at 10:00 am on June 21st. The tournament goes through June 27th and will be showcasing the most talented men’s and women’s ball hockey players in the world. 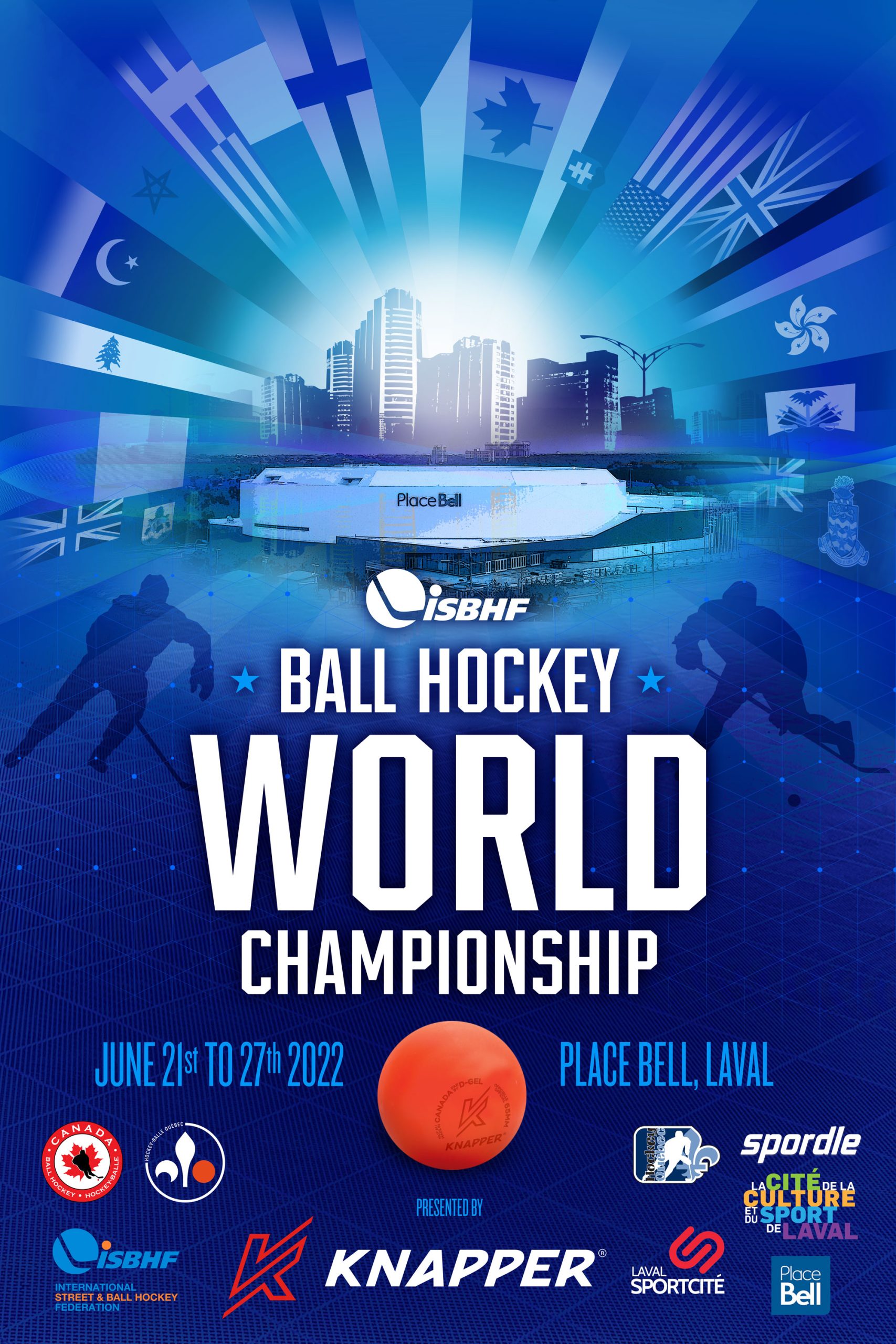 The tournament schedule is as follows: 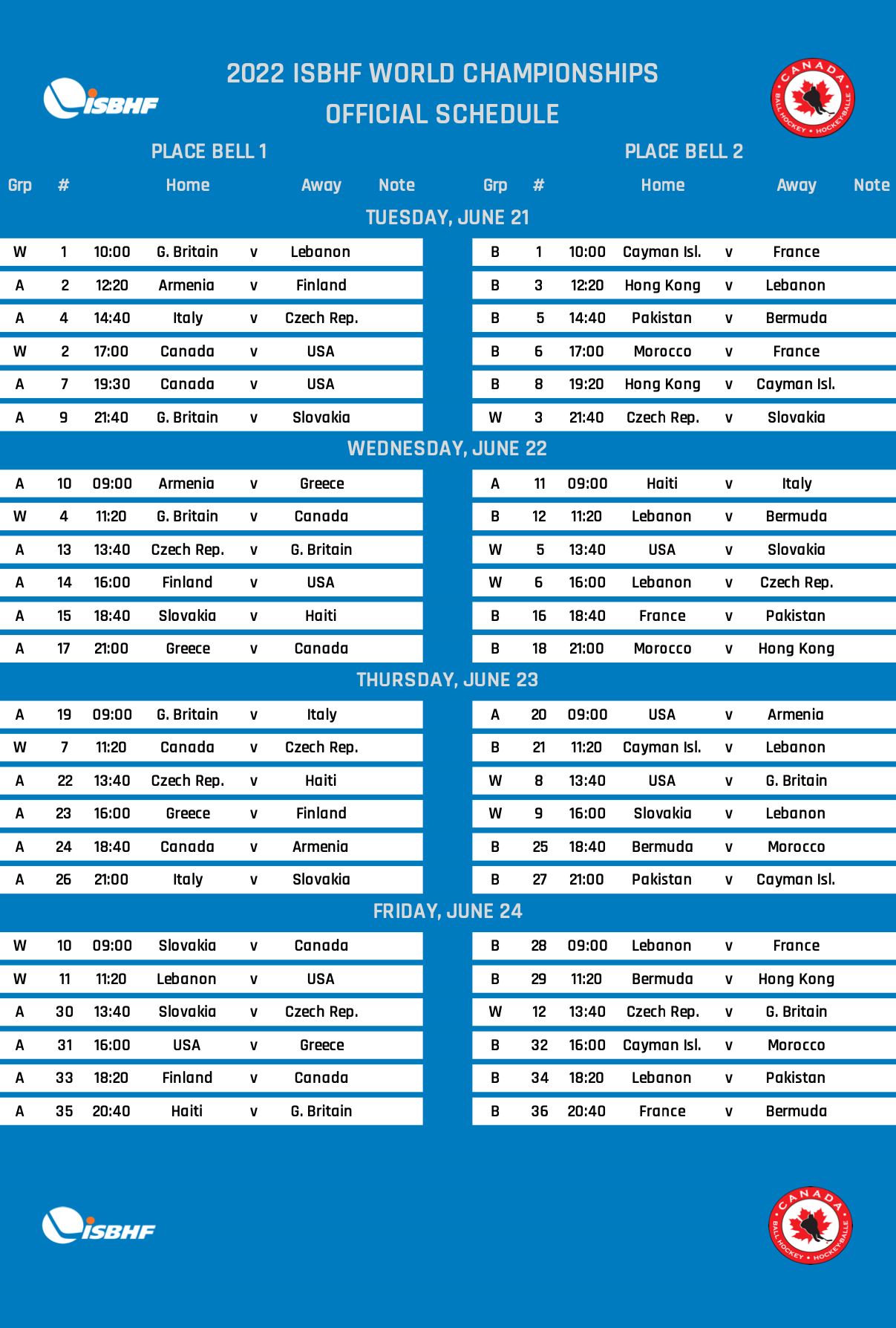 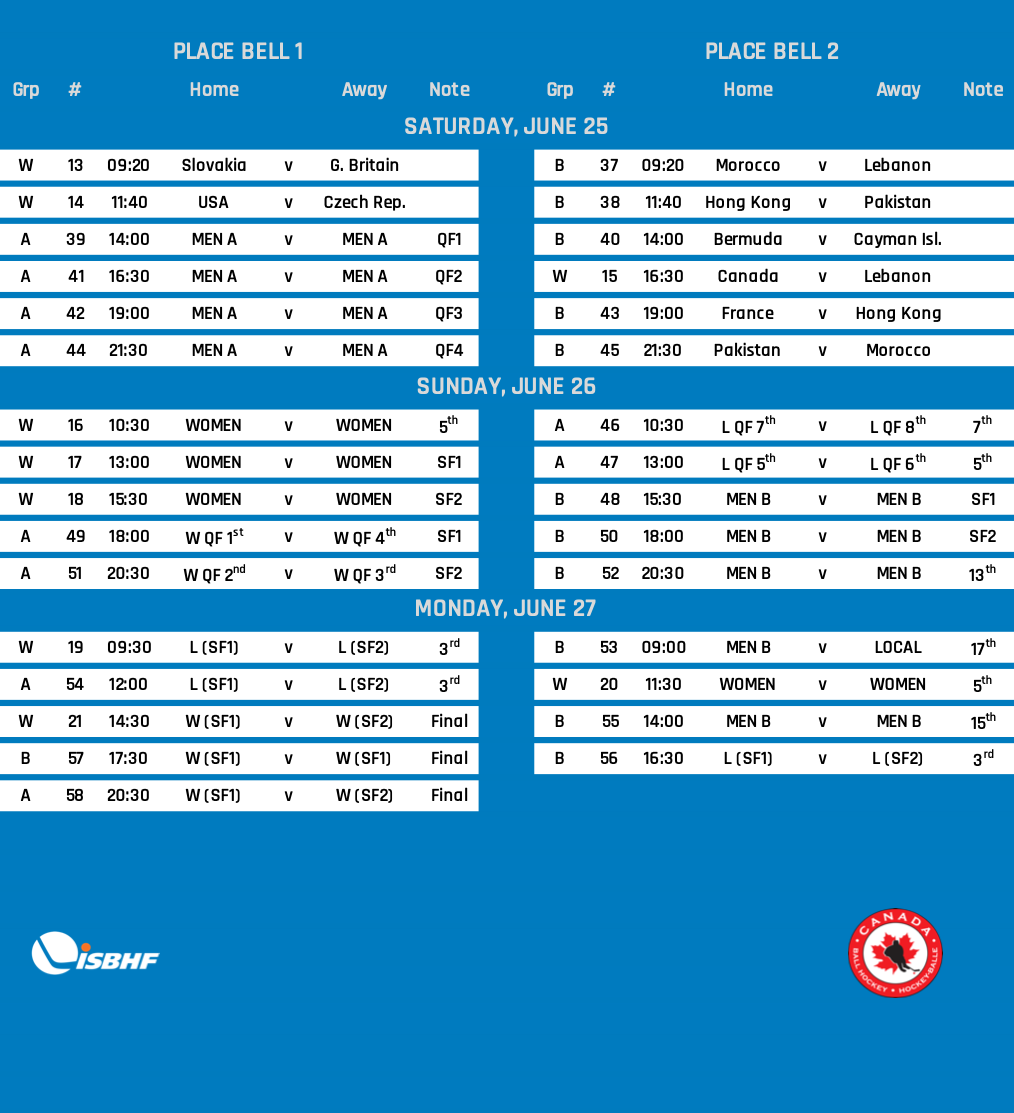 Hockey-Balle Quebec, in collaboration with Knapper, will also be releasing important information in the days to come in regards to ticket prices and livestreaming services.

Hockey-Balle Quebec take this opportunity to thank the ISBHF, the CBHA and all of the nations participating in the tournament. We would also like to thank Knapper in its capacity as the event’s official sponsor.

We are grateful to the City of Laval, Tourism Laval and Sports Laval for their financial assistance as part of the Support Program for Laval SportCité events.

On behalf of Hockey-Balle Quebec, we impatiently await the start of the tournament and are looking forward to seeing you all at Place Bell for the official ball drop!

As its name indicates, Ball Hockey Quebec is the organization that oversees ball-hockey in Quebec. Its mandate also includes other names and variations of the sport such as Dek hockey and cosom hockey, and covers all its formats: 5 vs 5, 4 vs 4 and 3 vs 3. Our mission is to develop and promote ball-hockey in Quebec, by encouraging the participation of players in an inclusive manner in a positive and safe environment, at both recreational and competitive levels.

Ball-hockey is the direct descendant of street hockey and boot hockey, which has been played informally since the beginning of the 20th century. In 1995, the Quebec Ball Hockey Association (QBHA) was founded to provide a structure for this increasingly popular sport.

In its first year of existence, the QBHA sent a men’s team to the Canadian Ball Hockey Association’s National Championships and won its first ever gold medal. Since then, the sport has grown tremendously and the momentum shows no signs of letting up. In 2019, the QBHA got a makeover and became Ball Hockey Quebec.

As of today, Quebec men’s teams have won 33 gold medals, all divisions combined (but more specifically div: A: 14, div. B: 7, div. C: 9, div. D: 3). For the women, despite a much younger program, they’ve won 5 gold medals (div. A: 2, div. B: 3). In addition to these great achievements over the past several years, the Quebec men’s and women’s teams have also won numerous silver and bronze medals as well.

Ball Hockey Quebec is the only Quebec association recognized by the Canadian Ball Hockey Association (www.cbha.com). The latter is an associate member of Hockey Canada and is part of the International Street and Ball Hockey Federation (www.isbhf.com).

Founded in 1977, Canada Ball Hockey is a governing body for ball hockey in Canada. Canada Ball Hockey is an Associate Member of Hockey Canada and is the National Federation that represents Canada at the ISBHF. The organization currently has 10 members in 9 Provinces, with registration of over 44,000 players, coaches and officials across the country. The main functions of Canada Ball Hockey are to provide common services to members (including a national insurance program), conduct national championships and events as approved by the Canada Ball Hockey Board of Directors, develop national playing rules and development programs to assist members in the administration and development of sport, and operate a National Team program at junior and senior levels to represent Canada at ISBHF Championships.

The ISBHF was established in Oshawa, Canada, in June 1993, recognising the need to unite the rules of the game across nations, and to organise international competitions. The first official ISBHF World Championship was held in Bratislava, Slovakia, in 1996, with Canada winning the historic first gold medal.

Nowadays, the ISBHF organises international competitions for all age categories – Junior, Senior, Masters – for both men and women, being pinnacles of the sport for each player, coach, referee or staff member.

The aims of the ISBHF are to support, develop and unite national associations, harmonise competition and rules, and promote the sport as an activity beneficial to the wider public, regardless of socio-economic background.

The ISBHF is also officially recognised by the International Ice Hockey Federation (IIHF) as the governing body of ball hockey, and many of the ISBHF national associations are recognised by the highest sporting authorities in their countries. The current vision of the ISBHF is to develop the sport in its national associations and join the Global Association of the International Sports Federations (GAISF), building towards the ultimate goal of the ISBHF – presenting the sport at the Summer Olympic Games.