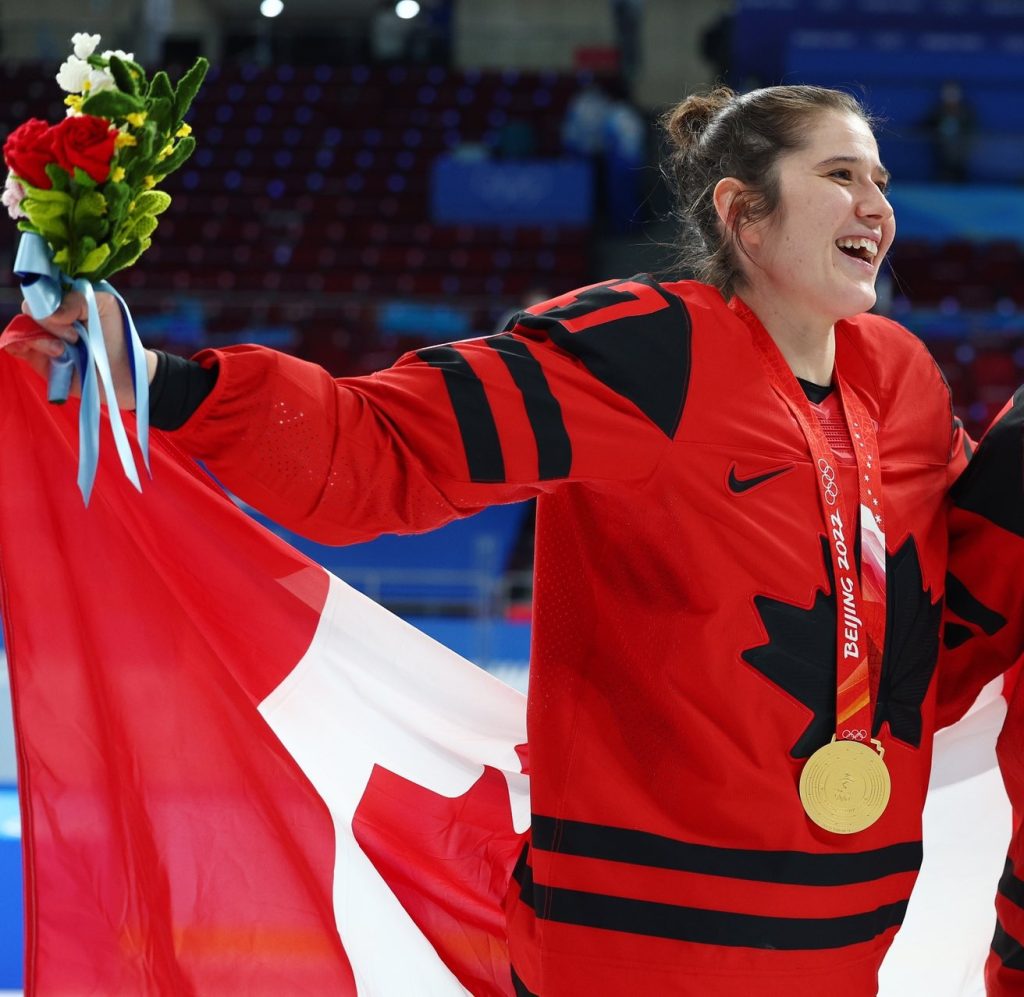 One of the most accomplished competitors of her generation, Jamie Lee Rattray is among a rare group to have competed in World Championships in both, the ISBHF and the IIHF. Having earned superstar status on the ice and on the slab, 2022 may herald her standing as a legend, highlighted by the feat of an Olympic gold medal.

From a ball hockey perspective, Rattray’s tremendous list of achievements include back-to-back CBHA National Championships. Having won her first in 2014 with a group of competitors from the acclaimed Ottawa Vanier Women’s Ball Hockey League, she would capture the title one year later as a member of the Toronto Shamrocks.

Coincidentally, the 2015 CBHA Nationals took place in Ottawa. Rattray, raised west of Canada’s capital in the suburb of Kanata, is among the Capital Region’s greatest sporting heroes. Having also played for the PWHL’s Ottawa Lady Senators, the city also hosted the 2010 National Aboriginal Hockey Championships, an event that Rattray proudly participated in, paying tribute to her heritage.

Internationally, Rattray finished as the leading scorer at the 2017 ISBHF World Championship in Pardubice, Czech Republic. Emerging with a bronze medal, it provided Rattray with her first podium finish from international ball hockey. 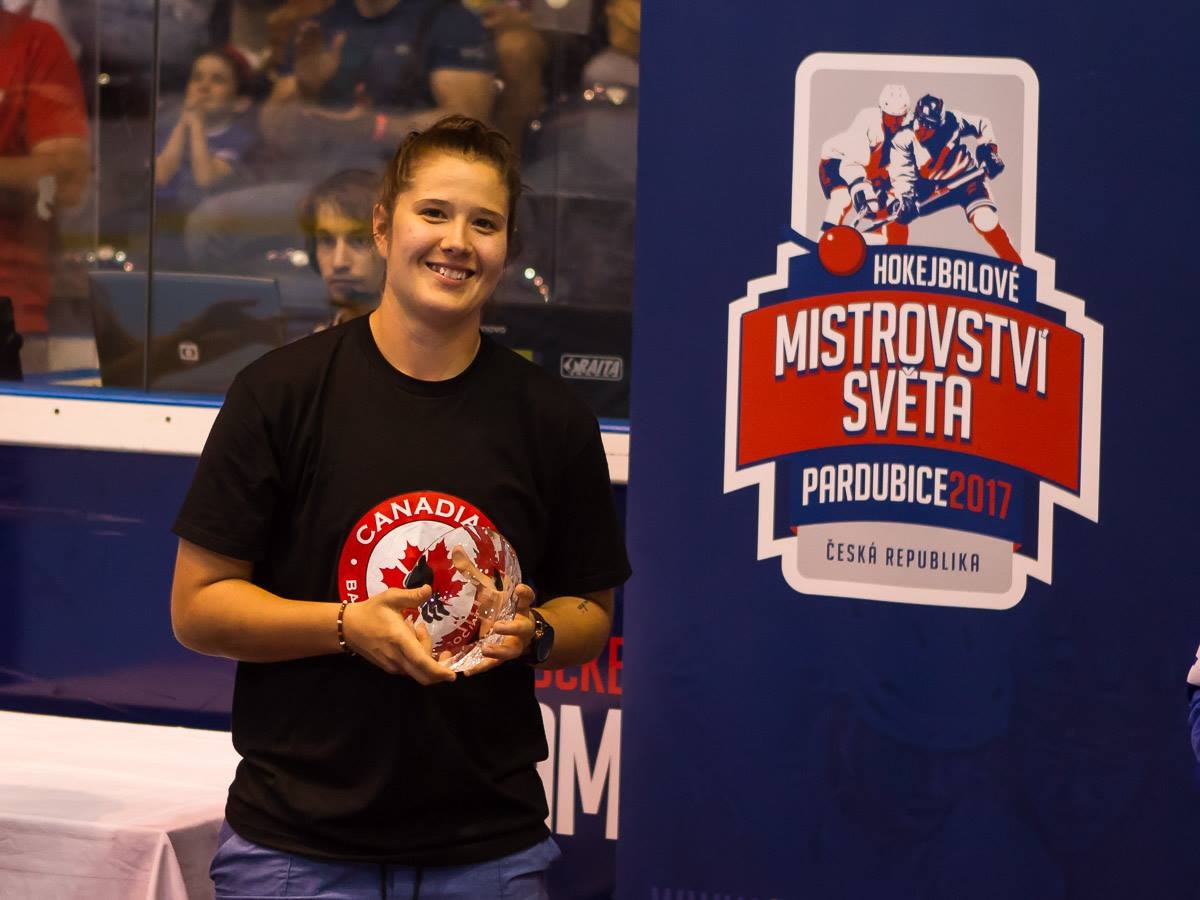 Remaining competitive on the slab, Rattray enjoyed numerous milestones on the ice. Winning the Clarkson Cup championship in 2018, Rattray also gained a bronze medal at the 2019 IIHF Women’s Worlds. Also named to Canada’s entry for the 2019 ISBHF Worlds, Rattray was not available to participate.

Fast forward to 2021, and Rattray added to her competitive legacy with a captivating pair of achievements. From August 2021 to February 2022, this fascinating time span saw Rattray win the IIHF Women’s World Championship in Calgary, followed by an Olympic gold medal, both exciting firsts in her career. The summit reached represents the culmination of her life’s work,

“It means everything; this is something that I have worked for, for a very long time! Especially with this group of women, we were able to stick together through everything and win the right way. I am so proud to be a part of this group.” 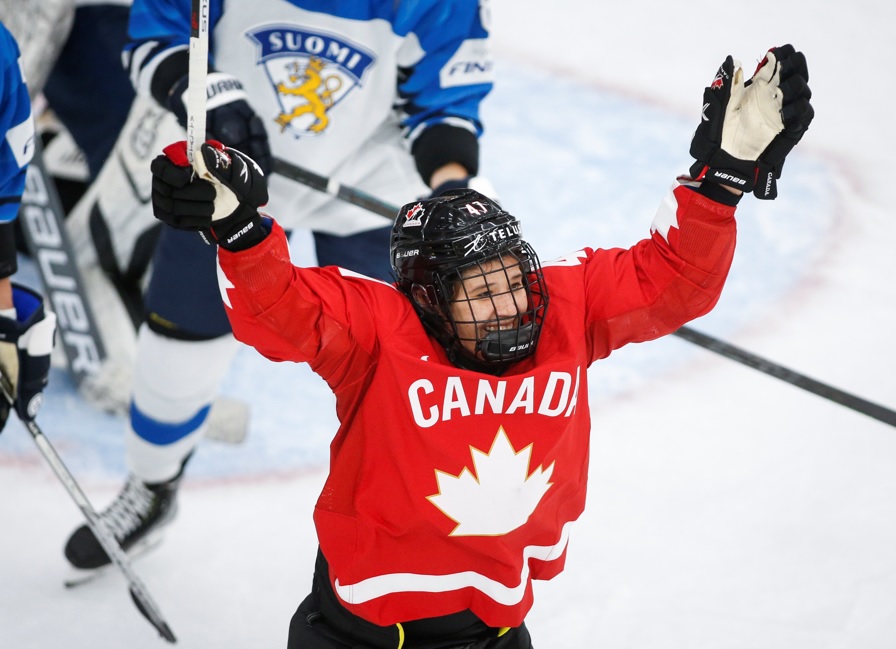 Making her Olympic debut on February 3, 2022, as Canada faced off against Switzerland, Rattray added to her monumental milestone by logging a point too. Earning an assist on a third period goal by Blayre Turnbull, she was one of 12 Canadian skaters to record at least one point in a double-digit win versus the Swiss.

Reflecting on the game, a career defining moment for the highly skilled forward, the only facet that outmatched the atmosphere and the grandeur involved a unique element of paraphernalia. Having worn the Canadian jersey internationally since her teens, the pride of the Maple Leaf took on a different competitive context on the world’s biggest stage.

“Putting on that Olympic jersey is a totally different feeling. It is crazy how surreal it feels pulling it over your shoulders for the first time.”

Two days later, Rattray enjoyed the jubilation of her first Olympic goal. Coincidentally, the third period played a factor once again. Scoring on Finland’s Anni Kiesala at the 7:06 mark of the third, Brianne Jenner and Ashton Bell earned the assists in a convincing 11-1 final, remaining on top in Group A competition.

Also finding the back of the net in victories versus ROC and the United States, Rattray remained a key contributor for a Canadian team in the gold medal conversation. Finishing the preliminary round with a solid six points, enjoying a four-game scoring streak, the feat validated her standing as a world-class competitor.

Scoring for Canada in a pair of elimination round games, including a quarterfinal win versus Sweden, followed by a semi-final victory against Switzerland, Rattray extended her scoring streak to six games. Finishing the Olympic tournament tied for 10th in scoring with Switzerland’s Lara Stalder, she was one of eight Canadians perched in the top ten. 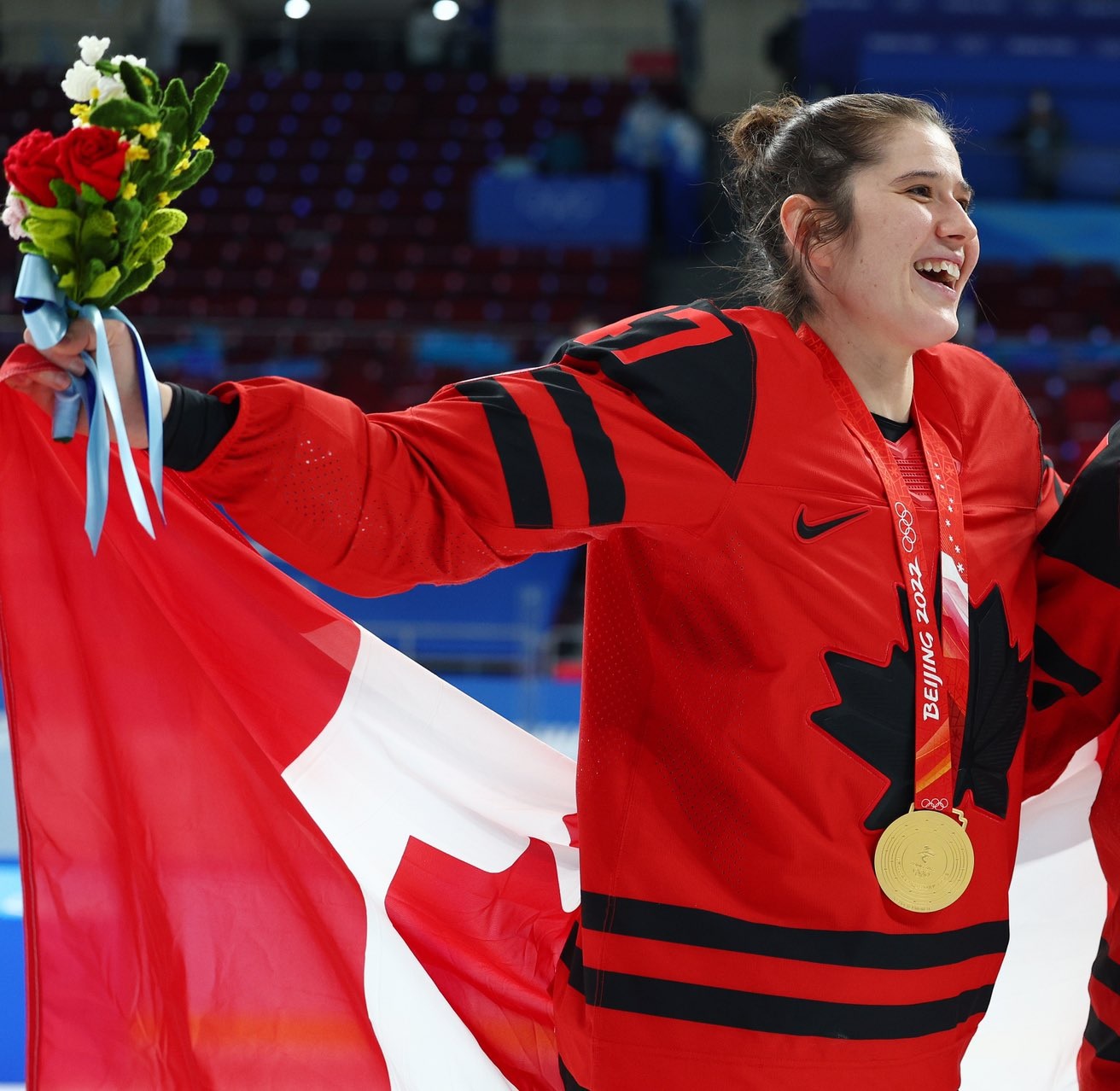 All smiles wearing an Olympic gold medal with the Canadian flag draped around her shoulders. Image obtained from: https://mobile.twitter.com/ratt26/status/1494600761833103360/photo/3

The bigger picture revealed a much more cherished achievement. Capturing a gold medal, the seminal moment was 13 years in the making for Rattray. Making her first appearance for Canada at the 2009 IIHF Under-18 Women’s World Championships, Rattray would play for all three levels of the National Women’s Team Program (Under-18, U22/Developmental, Senior). Winning championships at each level for Canada, she has also enjoyed over 85 appearances.

Also named to the roster of host nation Canada for the 2022 ISBHF World Championships in Montreal, the prospect of an Olympic gold medal and ISBHF title in the same year holds tremendous potential to add to her expanding legacy. Worth noting, no female player has ever achieved this feat. Akin to Beijing, the feeling of full circle in Rattray’s hockey journey also applies to Montreal.

Having starred with the Clarkson University Golden Knights from 2010-14, graduating with an NCAA Frozen Four national championship and a Patty Kazmaier Memorial Award, Rattray’s legacy as a program icon holds a treasured place throughout other facets of her career. Calling Golden Knights alumnae as teammates in the professional ranks and at the IIHF level, both hold a serendipitous place in Rattray’s pair of 2022 milestones.

The Canadian roster in Beijing featured fellow Golden Knights alumnae Erin Ambrose, Renata Fast and Ella Shelton. As a side note, Ambrose and Shelton were also making their Olympic debuts. Taking into account that the aforementioned have all won Frozen Four national championships with Clarkson, their winning ways have certainly translated into further glories playing for Canada.

“It was awesome competing (in Beijing) alongside some fellow Golden Knights; we brought a lot of those championship values from Clarkson with us to the National Team. Very special to share it with the girls I spent so much time with at Clarkson.”

Pondering the possibilities of two major hockey championships in one year, both featuring players from a glorious chapter in Rattray’s career, provides an intriguing luster to a brilliant body of work. With the objective of glory in Montreal, it would result in her first ISBHF World Championship, putting her in rarified air among not only Canadian, but global, hockey elites.